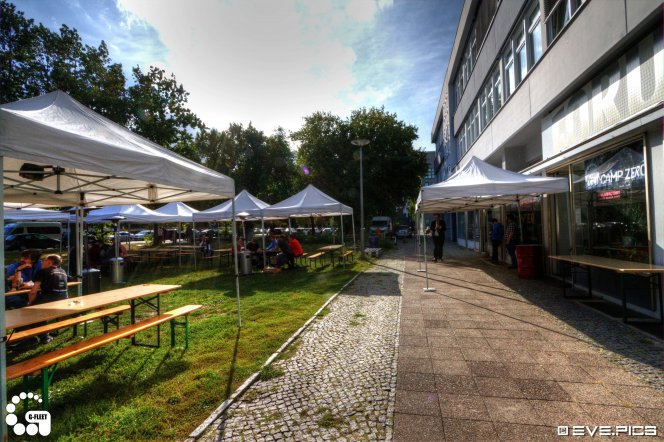 G-Fleet is the annual German Eve Online player event. This years G-Fleet 2019 was hosted in the Game Science Center in Berlin, and was part of the Eve Online Invasion World Tour. This year marked the fifth anniversary for G-Fleet, it was the most attended and biggest German event yet to come. 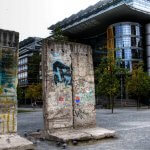 Last year’s event was also in Berlin. As the tourist that I am I visited some of Berlin’s most iconic landmarks. There were some that I didn’t have the time to see though, so this year I catched up on some sightseeing. I visited Checkpoint Charlie and saw some leftover bits from the German wall that one divided Berlin. 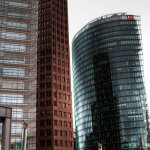 Besides the G-Fleet event, Berlin has a vast variety of structures and styles. It’s a very industrial city, and it feels like you’re walking through the early stages of a Caldari city with massive and beautiful buildings surrounding you. I felt completely relaxed taking a coffee at Potsdamer square, and watching the world go by as if I was at the undock of Jita. 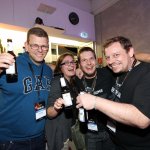 I’ve been attending Eve Online events since 2013,and I’ve seen my fair share of the diversity of the pilots that attend. The New Eden’s inhabitants come from all over world, and from all layers of society. I’m grateful that I can say that many of these pilots have become my friends over the years, and I’m never alone no matter which Eve Event I go to. We might be shooting down each others stuff ingame, but in real-life we all share beers and war stories.

G-Fleet 2019 attracted around 300 attendees, a record for the event. Pilots from Central Omni Galactic Group, Goonswarm, Sixth Empire, Wingspan, Northern Coalition, and many more famous alliances were present. There was more than enough space for all of these people to hang out with each other, grab a drink and catch up. 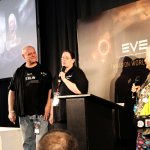 The best thing that can be said about G-Fleet 2019 is that the planning and execution was pretty much flawless. There were some minor setbacks and issues backstage before the event, but basically nobody noticed anything about that.
The location of the venue was new but refreshing. There was plenty of room outside with tables and chairs so we could all relax and sit down to talk to each other. The inside of the Game Science Center was modern and cool, and had some very nice augmented reality demo’s that attendees could try out.

The event went absolutely smooth, I have not seen any hiccups or flaws whatsoever. The organisers and their team of volunteers have done an outstanding job of hosting this this event for us. This fifth edition of G-Fleet was widely celebrated and can serve as a blueprint for future editions as well as other Eve related events. 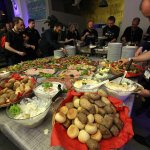 There was food available almost round the clock. Each G-Fleet 2019 ticket included free food, and there was plenty of it. From nice sandwiches and salads, to German style soups, pork, pasta, chicken and other delights. If you still had some room left in your stomach you could go for deserts and cake.
The prices for drinks were also really good, 1 euro for a coffee or a Quafe G-Fleet Edition, and 3,5 euro’s for a pint of beer. As allways, G-Fleet gives the first couple drinks for free with the drink tokens you get. 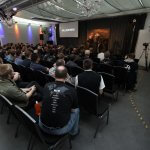 As always there were presentations by both CCP Games and Eve Online players during G-Fleet 2019. CCP announced a couple of things that are pretty noteworthy.
First off, something that not a lot of people know about. The New Eden system Molea is home to the pilot cemetary. There is an Amarr control tower set up that serves as a beachhead for the many permanent graves (containers).
As part of the revamp of player owned structures all control towers will eventually be removed from the game.  CCP Is going to give the memorial an overhaul and has designed a unique and permanent structure for it, with unique particle effects.

Other announcements were bumping timers, wormhole graphics overhaul and skills on demand improvements. And, we got to see the announcement for the END of the blackout in nullsec, which I’m personally very happy about. 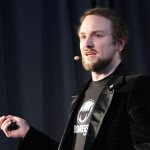 This year my favourite presentation was by Nova Valentis from Bombers Bar. His presentation showed the birth and growth of Bombers Bar and their accomplishments. His charismatic speech, together with awesome insights, some nice jokes and interesting subjects made this a presentation to be remembered.

I would also like to give my thanks and appreciation for the ‘Even Asteroids Are Not Alone’ short movie. It beautifully captured what kind of friendships can form in Eve Online and I think the whole room all got a little choked up when it got played. 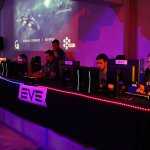 The PVP area was massive and awesome, I have yet to see a cooler game room. The setup with all the Corsair pc’s and equipment was breath-taking. All of the PVP fights were show on a wall with a beamer and also on the streams. Standard Invasion World Tour rules applied to all the fight during G-Fleet. Eventually No Fox Given won the G-Fleet PVP tournament, with Dopamine in second place.

Other than the tournament fights, there were also some organised Tranquillity server roams that saw some nice brawls. 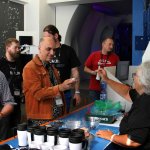 Attendees had the oppourtunity to donate for Die Arche, and organisation that helps children in need. If you donated any amount you were able to choose among a big collection of loot and swag, and take it home with you. There was also a silent auction, with many artwork pieces and an Eve Online signed CPU. The top piece was a Invasion World Tour ‘Berlyn’ t-shirt. It was purposely misspelled, making it the only one in existence. The Berlyn shirt was bought for the walloping amount of 600 euro.

During the closing ceremony there was also a live auction. The piece auctioned was the original ‘Well-Worn Fedora’ that was used as inspiration for the ingame item. It took a tear to hand over this beloved fedora, that was worn for many years. It eventually got sold for 500 euro.

The total amount of money raised was a little over 5000 euro at the end of the event, which is an amazing amount. 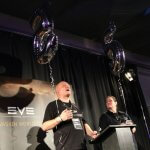 I have yet to attend an Eve Online event that I didn’t like, but I’ve seldom seen an event go as smoothly as G-Fleet 2019. There was enough to do for everyone, enough to see and to hear. The attendance of so many CCP developers (around 13) was amazing and made for great moments. I would also like to thank Streamfleet and the G-Fleet media team for the effort they put into covering the event.
The organisers, Holger and Anna, and their team of volunteers made a tremendous effort into making this the best G-Fleet yet to come and it shows in every aspect of the event. Thank you CCP for attending and co-organising G-Fleet 2019. And thanks to all the attendees that attended, without you there couldn’t be a G-Fleet at all!