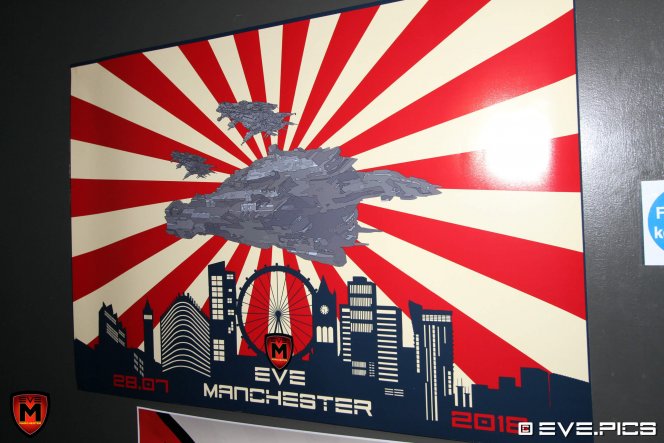 Last month I visited Manchester to see the city and to attend the amazing EVE Manchester 2018 event. EVE Manchester took place at the Black Dog Ballroom in Manchester. The event was organised by EVE pilot Adratea from Central Omni Galactic Group. She even invited CCP Masterplan to join the party as well!

The black Dog Ballroom is a cosy and fun pub that also features a karaoke room with a full lounge set in the back. The event itself was free and the drinks were not expensive. On arrival the attendees also received some nice Eve goodies. There were ship SKIN codes and players even received a random Eve Online ship model! Kaiio, an Eve player from Sev3rance had 3d printed around 70 small ship models, ranging from frigates to battleships and freighters. I personally got a Raven model that I’m really happy with, and the quality of the model is really nice.

The first round of the alliance tournament was also during EVE Manchester 2018, so we all gathered at the big screen projector to watch the matches. It was exceptionally cool to see all the exited Snuffbox guys when their team brutally won their match. 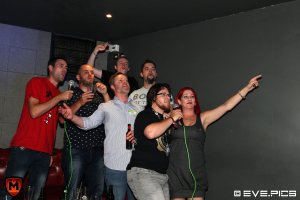 The karaoke room was also packed with people and the singing and dancing went on for quite a while. You could choose your own songs and make a playlist, so you would know which songs would come up. I joined in as well singing some proper classics and had a great time and went as far as to sing the Disney song ‘Under the Sea’.
I even tried beerpong for the first time and found out that I’m not as bad as I thought.

Among the drinks there were also special Eve themed beverages that could be ordered. The one that stood out was the awesome ‘Pos Fuel Recharger’, a giant bucked filled with a strong cocktail drink that had to be enjoyed with friends.

Around 80 people visited EVE Manchester 2018, which is more than was expected. The venue itself was perfect for the amount of people and I had an absolutely amazing time there. The people and the atmosphere were good and the location was great. 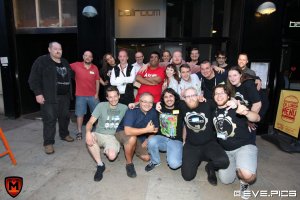 The city of Manchester is also really cool to visit on its own. There are lovely restaurants and pubs, the shopping is nice and the public transport is excellent. Before and after the event I also teamed up with friends from Eve. Before the event I also went to a barbeque with the good folks from Stranger Danger alliance.

EVE Manchester 2018 was well worth the trip, the overall experience was very good and I hope to be there again next  year. I would personally like to thank all the guys from Central Omni Galactic Group and Sev3rance, Trony and xHjfx and the rest of the pilots from Curatores Veritatis Alliance, AllMappedOut (for all the singing), Kazik Brai (great bbq mate!) and the rest of the Stranger Danger capsuleers,  my girlfriend for tagging along with me, and last but not least Adratea for organising the event in the first place.
I hope to see all of you again next year at EVE Manchester 2019!