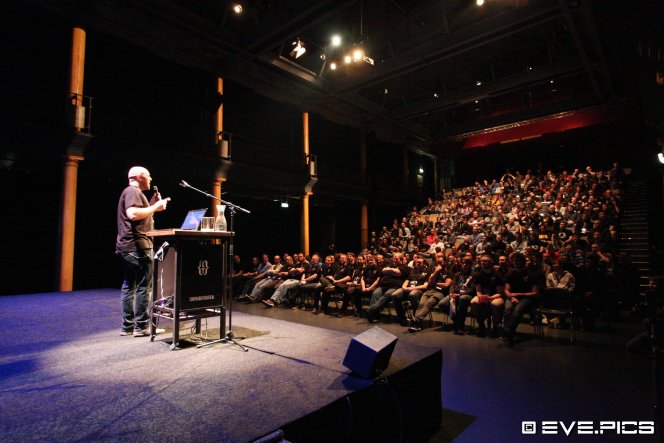 Last week the EVE Online player meetup, Evesterdam 2016, was held in the Compagnie Theatre in Amsterdam. Like the previous editions, this year’s Evesterdam was organised by Valentijn Geirnaert (pilot Dierdra Vaal) and his team of volunteers. Every year, the event attracts more and more visitors. This year approximately 330 people visited the space MMO event. There were a number of CCP developers and EVE Online pilots giving presentations on numerous subjects. It was also possible to play EVE Valkyrie and EVE Gunjack. Both these games are the first virtual reality games set in the EVE Online universe.

More than just an event 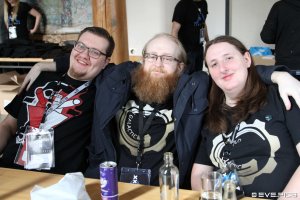 Evesterdam 2016, held for the fourth time, is one of those events EVE Online players don’t want to miss out on. The event is more than just some presentations and playable game demos. For me it’s more like a reunion, a coming together of friends and relatives from all over the world. Every attendee either plays EVE Online, or is in some way affiliated to the lore and background of the game. Evesterdam is a place where everybody can interact and listen to each-others EVE Online stories. It doesn’t matter where you come from, you are accepted for who you are, both in-game and in real life. It could very well be that you’re having a drink with somebody that destroyed your station last week, or who you’re currently at war with.

Evesterdam 2016 also featured numerous presentations, which were better than ever. The subjects were quite diverse as players and EVE developers took the stage.
The first presentation on Project Discovery was quite difficult to understand for people that didn’t study biology, though it gave a great insight on the extent of the project. Yadaryon Vondawn worked with CCP to develop Project Discovery. It is an in-game mini-game which lets you analyse cell patterns. When you classify the patterns correctly you are given in-game credits and items. The analysed data is actually used for cancer research. By completing the mini-game a player contributes to that cause. 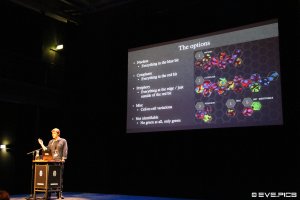 “Female pilots are most likely to become successful spies.” 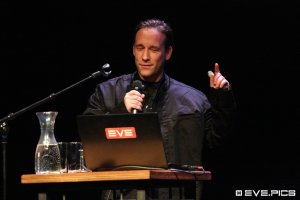 The presentation by Kamar Raimo on spying in EVE Online gave some viable insight into this aspect of the game. Unlike other MMO’s, like WOW for example, spying is not prohibited in EVE. Players can join a corporation or alliance with the sole intent to steal assets or kill allied pilots. This aspect of the game urges corporation and alliance leaders to always be vigilant of intruders.
The presentation was also very interesting for pilots who want to engage in espionage and want to build an in-game profession around it. The overall tip given was that female pilots are most likely to become successful spies.

It all begins with data 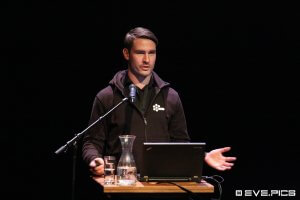 The last presentation given on Saturday was by CCP Quant, and was about EVE Metrics. This program can generate charts that contain a large diversity of EVE Online data. A lot of EVE Online data is stored, and can be used with EVE Metrics. It’s possible to show every ship that has killed another particular ship, or see what kind of ammunition is used mostly throughout all EVE Online regions. It is even possible to see how many units of a particular item exist in-game. These are just some of the possibilities of EVE Metrics.
For me this was one of the most interesting presentations of the entire event. The amount of information available is amazing, and the program can show graphs and great speed. The fact that a lot of in-game actions are being ‘recorded’ is quite disturbing, but the amount of information given is very impressive.

“One of the first Oculus VR goggles CCP received had serialnumber 16 on it.” 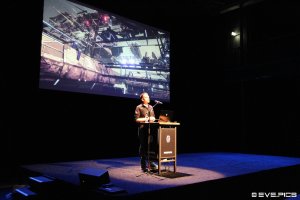 EVE Valkyrie, one of the first VR games to set foot in the world of New Eden has a rich development history. What started out as a side project written down on a beer coaster turned into a promising virtual reality space shooter. The first time I played EVE Valkyrie was in 2015 at Fanfest. The fast paced action combined with the immersion into the pilot seat of a fighter spacecraft was an awesome experience that I will never forget. You could think of it like being in an endless roller-coaster ride shooting bad guys all around you. It is amazing to see the passion and effort that CCP Terrorshark and the other developers have put into the game. To experience all the space fights, the chaos and the adrenaline rush you get when you take an opposing player down is pretty epic.

It’s a round the clock job, but somebody has to do it 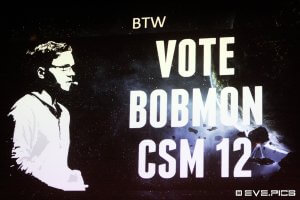 The CSM (Council of Stellar Management) is a player based group that communicates between CCP and the EVE Online players. All CSM member are chosen by the EVE Online community in a yearly election. They act as a bridge and help receive feedback on EVE Online, which they later forward to CCP. They reflect on the suggestions given by players and work alongside CCP to address these issues and/or ideas. It’s a busy job, and consists of weekly and monthly meetings, summits and round table conversations.

CSM member Bobmon was chosen to interact with the EVE community and to shine a light on their troubles and needs. Just as all CSM members he receives emails on a daily basis. All these suggestions need to be answered appropriately, and the ideas need to be examined as to whether or not they would mean an improvement to the game. It’s a round the clock job and I really respect Bobmon for sticking his neck out for us every day.

The end of an era 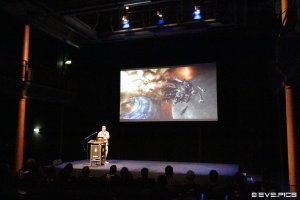 The last player presentation at Evesterdam 2016 was by Killah Bee, and was about the CFC war. In November of 2015, a group of pilots called ‘The Imperium’, formerly called the ClusterFuck Coalition, controlled the entire north section of the EVE Online star map. Because their territory was so vast and dangerous nobody even dared to try and invade their space.

Early in the year 2016 this all changed when a new coalition group formed to teach CFC a lesson in violence. Funded by Lenny Kratiz2, a group emerged that later called themselves the Money Badger Coalition (MBC). The MBC consisted of some of the biggest alliances in EVE Online. Alliances like the Northern Coalition, Pandemic Legion, Shadow Cartel and Test Alliance Please Ignore should be names that every EVE player has heard of. It was a tough battle for both sides. Eventually MBC was able to drive CFC out of their space. The biggest player group in history was defeated and driven apart.

I remember the battle of UQ9 like it was yesterday. I was there in system, witnessing the onslaught and the sheer numbers MBC were able to field. After the battle, the entire region felt like a ghost town when I warped back to high-sec.
Killah Bee gave us some good insights into the war, and what a combined effort like the MBC can achieve. 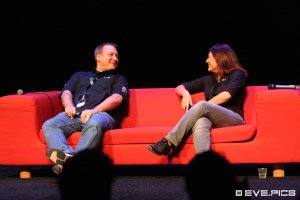 During the last presentation of Evesterdam 2016 we entered the auditorium to see CCP Fozzy and CCP Mimic sitting on a rather comfortable couch. It was Q&A time and they were ready to answer every question we could throw at them. It’s very interesting to see their vision on the development of EVE Online, and how small ideas can turn into big changes.

The new command burst modules and the rebalance of all mining ships is a clear example of that. CCP Fozzy also mentioned that he thinks it would be cool to have a new set of Black-ops battleships. It would be interesting to see a Tech II battleship that can take a support role and one that can be more dps orientated. CCP Mimic mentioned the idea to remove all known chat windows out of the game, and to replace them with an in-game microphone system. Both of these ideas are just things that came to mind, it’s not certain they will ever make it into the actual game. 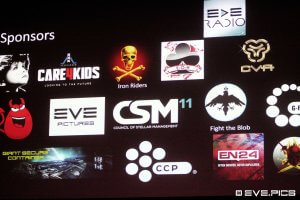 Evesterdam is also known for its prize-draws. This year we had more than 310 billion ISK in prizes. These varied from Plexes, ships and ISK. The main prizes were a Wyvern with 12 plex and a Chameleon cruiser. All these prizes were contributed by sponsors, and every paying attendee was eligible to win them. 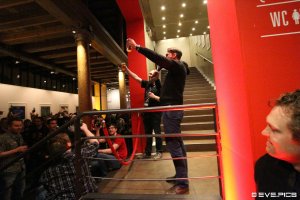 EVEsterdam 2016 wasn’t only about presentation and sitting in a chair. It’s also about coming together, having a drink and telling good stories. As I said earlier, you will always get accepted at an event like Evesterdam, that’s the nice thing about EVE Online. It’s a game for people from every country and every layer of society. We all ‘live’ inside a fictional world, and we’re all in it together. There was a pub-crawl on Friday, and a fun party on Saturday night. The other nights we just bonded together.

I met up with some friends from Providence, Central Omni Gallactic Group, and I met some very nice guys from the CVA Alliance. On Sunday we went into town with a couple of guys from Apocalypse Now Alliance and had a very nice dinner. After we finished eating we went into a bar and had the most amazing discussions about EVE Online. But we also talked about ourselves, and what we did in real-life. That made it very personal and interesting, and that’s also a part of why EVE binds us all together.

I want to thank Valentijn Geirnaert, Tjerk Dijkstra, Bob van den Bosch (Bobmon), Anne, Mies, and all the attendees for making Evesterdam 2016 one of my highlights of 2016. Your effort and dedication did not go unnoticed. I also want to thank you guys for having me and letting me cover the event. Evesterdam 2017 will be the fifth time Valentijn and his crew organises this massive event and I’m already looking forward to it.

Please check out all the photos, and I hope to see you all next year!