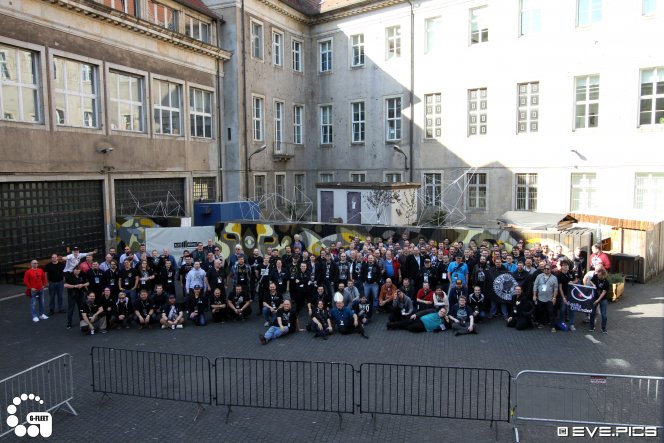 G-Fleet is an annual Eve Online player event, which is held in Germany. The location for G-Fleet 2018 was in Berlin, at the Alte Münze. This was the first time G-Fleet was held there. The Alte Münze is a former coin press facility and G-Fleet 2018 was held in the cellar of the complex, where they used to store the pressed coins. The presentations were upstairs in the main auditorium.
The new venue looks amazing and feels like a ‘Minmatar slave prison’, with very good food and beer though.

The event lasted two days, on 5  and 6 October. The event offered a PVP tournament, player and dev presentations, pub games and many more. G-Fleet 2018 lured in more than 220 visitors.

A Taste of Berlin 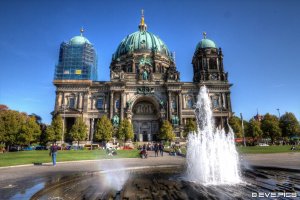 On the first day, before G-Fleet started, I went for a long walk across Berlin to see some of the city’s landmarks. Some highlights were the Berliner Dom, the Brandenburger Tor, the Holocaust monument and the Reichstag building.
Berlin is an amazing city. The architecture is very diverse and there are so many nice places to visit. I felt at peace having a nice cup of coffee and a sandwich in a local diner and I enjoyed to sit outside and watch ‘the real world’ passing me by. 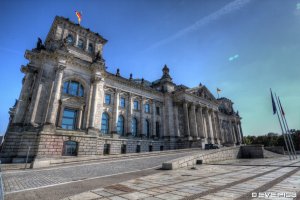 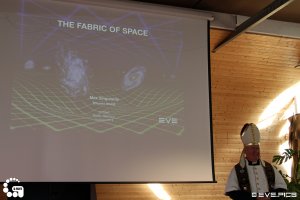 The presentations for this year’s G-Fleet were all in English, which I thought was better, because I can understand it more easily. There were  5 presentations from various speakers.
The first presentation was by CCP Cognac and was about various Eve related items, including the impact Abyssal Deadspace had on the rest of New Eden. We also learned that CCP is developing a new system in which 3 frigates can team up and run an Abyssal site.

The rest of the presentations were by Eve Players. We had an informational talk about what the ISD is and what they do, tips and tricks about a variety of PVE options for players and a presentation about Signal Cartel. The very last presentation was done by no-one other that mr. Charles White, aka Max Singularity, about the Fabric of Space.
My personal favourites were the Signal Cartel and Charles’s presentation.

Streamfleet was also present during G-Fleet 2018 and streamed and recorded a lot of events. They had a very nice interview room setup and they also had cameras set up in the presentation room.
All the feeds from the cameras and the PVP tournament, as well as the mobile cameras, were all sent to the main computer in the interview room. The streams could all seamlessly be edited into the live-stream.
They did an awesome job capturing the various events and presentations during G-Fleet 2018, I hope they will be back next year.

There was a very large PVP room set up with around 30 gaming pc’s. The tournament was split into 2 event types, 3v3 and 7v7.

The 3v3 event consisted of three random people being put together as a team, having to use only T1 ships and modules to take out the opposing team. The 7v7 was a bit more restricted. This event was intended for alliance teams and followed the rules for the Alliance Tournament. You only had half an hour to build 4 team setups. Each setup could only be used one time, so they had to be pretty diverse.

The guys from Lumpy were the big winners during the PVP tournament, both during the 3v3 and 7v7 event.
You can see the recording of the PVP matches here: https://www.twitch.tv/videos/319138355 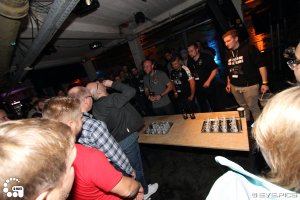 There were also some late night drinking games that consisted of drinking loads of alcohol. I think everyone was a winner here, especially if you look at the fact everyone got free drinks!
On the last day of G-Fleet 2018 there was a prize draw with some very cool prizes. 1RON BANK and Daniel Rahl were some of the main prize draw contributors. They even contributed a CCP Eve Online server blade and a signed copy of The Art of New Eden! Among the prizes were also a Valkyrie 66 North travel bag, various multi-billion ISK handouts and other eve related prizes. 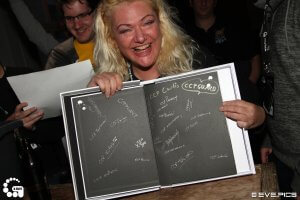 This has been the second G-Fleet that I have attended, and the new venue is a big ‘step up’ for the event. Its cool industrial style interior fits the Eve Online event perfectly and there is plenty of room for even more players.
Just like last year food was included in the ticket price and it was very good. There was enough choice and you could also ask for vegetarian, vegan and/or gluten free options.

I want to thank Anna and Holger for the enormous effort they put into organising this event. The event is growing bigger and better every year which mostly is because of them.
I also want to thank CCP and Streamfleet for showing up in big numbers to help cover the event. Last but not least I want to thank you for attending G-Fleet 2018, and  for making it an awesome event  filled with friends and cool highlights! I hope to see all of you again next year!

Below are are the pictures taken during the event: