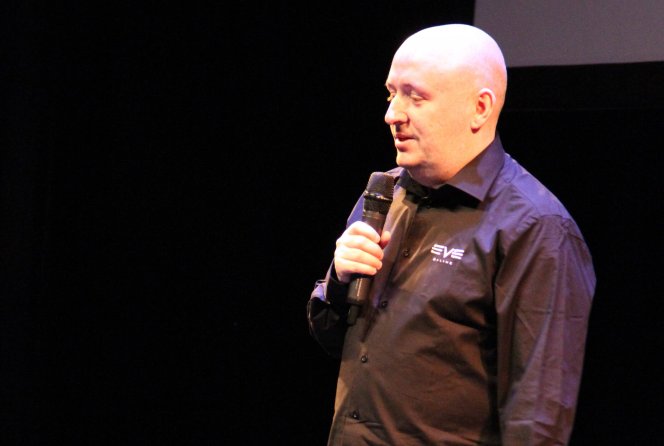 Eve.pics was lucky enough to have the opportunity to get an interview with Paul Elsy, othwise known as CCP Falcon. This is part 2 of the interview.
As a community manager Paul not only handles player interaction online, he also travels the globe to attend and help host Eve Online player Events. I’ve met Paul a couple of times and he’s always awesome at what he does, and he is very fun to hang out with.

“I’ve been attending EVE player gatherings since 2004-2005 or so. My first gathering was London, back when Midnighter from The Causality used to host it. When he retired from EVE, my old corporation, Veto, took over hosting the gathering. One of my dearest friends, Demetri Slavic, who was a director in Veto, still runs it to this day under the EVE_NT London Banner. I’d say we used to co-organize it, but in reality he did most of the actual work and I acted more as a mouthpiece to promote the event given that I was very well known in certain circles in the community before I came to CCP.”

“Organising is part of the job”

“My job varies wildly depending on the gathering, to be honest. I generally handle content and scheduling for most of our major events, and work with the leaders of the EVE Dev Team and our Public Relations Team to organize and set key messaging and themes for the events. At Fanfest and Vegas I tend to be running around helping where I can and keeping the schedule organized, then at some of the other events that I visit that aren’t CCP hosted, I tend to be more relaxed, talking shop with many fellow nerds, having drinks and generally spending as much time with the community as possible. 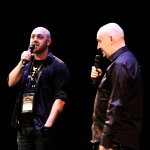 Then we have CCP Curtis, our Event Lead, who does the heavy lifting and gets all the logistics and technical side of the events taken care of – he’s an absolute powerhouse for getting stuff organized and having great relationships with our venues and partners.

Of course, it’s far from just me, there’s a huge team of people here at CCP who contribute to events, from all the presenters who work hard to get their content together, down to the volunteers we have managing check in and making sure that people have their swag and access passes. It’s an incredible team and I’m super lucky to be a part of it.

Regardless of where I am though, I try to make as much time for the community as possible. I always want to make sure that I get the chance to talk to as many people as possible.”

“My heart will always belong to EVE London”

“Oh god, I can’t count all the events I’ve been to. Fanfest 2020 will be my 13th Fanfest and it’ll be my seventh as a Dev, which is a hell of a milestone as I’ll have been to more Fanfests as a dev than as a player at that point. I’ve never missed a Fanfest since I first came to Iceland for Fanfest 2006.

Other events that I’ve been to include EVE Vegas, EVE Down Under, EVE London, EVE Newcastle, EVE Paris, EVEsterdam, Gankaton Copenhagen, The BoB BBQ, Veto Summer Camp (Nashville, TN). There’s honestly too many to remember. I’m pretty well-travelled when it comes to EVE events.

My heart will always belong to EVE London because that was my first ever gathering, but there’s so many different ones to choose from. A couple that really stand out to me are EVE Down Under, and EVE North East.

EVE Down Under stands out because the community over there is relatively isolated due to geography and timezone difference, but despite that, the second that I arrived I felt totally at home. The Australian community is amazingly welcoming and super passionate.

EVE North East stands out because of its location. I haven’t had the chance to head out there yet, but a big player gathering on a campsite with a lot of outdoors fun and barbecuing sounds amazing. It sounds a lot like the BoB BBQ from back in the day, but open to all EVE players, which sounds amazing.”

The mystery of the CCP Falcon Mystery Code! 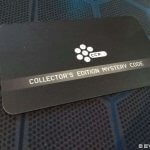 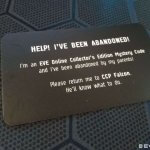 During Fanfest 2018 I found a CCP Falcon Mystery Code card in a book in the Eve Online store. I was thrilled and excited, because the card said I had to find CCP Falcon and show the card for a cool rewards. I vigorously looked for Paul, and finally met him in at the top floor of Harpa, only to find out it was a hoax.

“Oh god, that. It’s been going on for a couple of years now after we’d had a period of quiet around stuff we were giving out for Mystery Code Holders. If I remember right, the physical jokes with the fake Mystery codes started at Fanfest 2018 when people started coming to me with them and handing me them as there were instructions on the back to do so.

At the end of Fanfest I had a couple of hundred of the things. I felt really bad about all the paper that’d been wasted on them so I put them all in the recycling given that CCP is a pretty environmentally friendly company.”

You might think players and developers of a space-MMORPG are hidden behind their in game characters, but not Paul.  Because he is so active in the Eve Online community and get on stage a lot, people often recognise him in his spare time.

“More than people would expect. It happens semi-regularly in Iceland because it’s such a small country and there’s quite a few EVE players who live in Reykjavík, so I’ve become quite used to that. It is one of those countries when you can just be walking about downtown and see people who’re at the top of the government doing everyday things like grabbing their groceries or going to the post office.

It’s always funny around Fanfest time too when EVE players start to descend on Iceland and suddenly you start to get recognized on the street a whole lot more. It’s nice to talk about spaceships though, so I’m always happy for people to come say hi. There’s nothing more I love than chatting to fellow nerds.

“I’ve also been recognized in the weirdest places“

I’ve also been recognized in the weirdest places too. It’s happened twice at security in airports, once at border control in Seattle when I was flying through to go to EVE Vegas, and the guy checking my passport was like “Sup Falcon, you heading to Vegas?”. I just looked at him like an idiot until I realized what was happening, then we both started laughing our asses off.

The second time was in Heathrow when I was on the way to Australia and the guy running the full body scanner for my flight to EVE Down Under was like “wings up, Falcon” when I got into the scanner where you have to put your hands above your head.

EVE PLAYERS ARE EVERYWHERE. It also doesn’t help that like 75% of the t-shirts I own have some form of connection to CCP or EVE Online.”

“I was super happy to make it to Amsterdam for the kickoff of the World Tour, and schedule permitting I’m going to be in Toronto, Berlin, Vegas and Londo 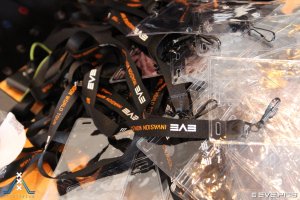 n too. I’ll probably be around for some of the non-world tour events this year too if I can find time to fly in my schedule!

I don’t really think that there’s one event that I can pick out that’s going to be the best, or that I’m going to be looking forward to the most. I’m excited to be going back to Vegas for sure, and I haven’t been to Toronto in around a decade, so it’ll be super nice to go back because it’s a beautiful city. We have some incredible EVE players there too.

I’m really going to miss not having Fanfest this year in Iceland, but I’m just super stoked overall that we’re trying new things and bringing EVE to more people by making events like this more accessible. I’m also really looking forward to seeing which teams make it to the EVE Invasion Tournament Series finals for Fanfest 2020.

I’ll be very happy with the amount of airmiles that I’m going to get from Icelandair. I’ll also be glad when it’s all over and I can finally go to sleep! Hahaha, just kidding!”

Stay tuned for the third on CCP Falcon! Article number three will be about CCP Falcon’s experiences in Eve Online!