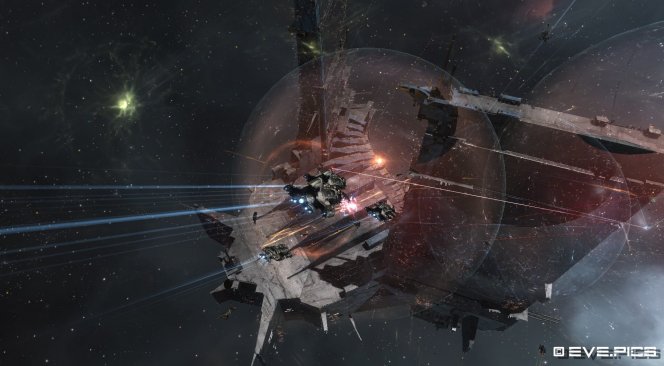 Last Sunday there was some pretty impressive fighting going on in the M-OEE8 system. A Keepstar citadel got reinforced and there was a massive gathering of pilots. Everyone was either hell-bent on saving the citadel, or to reinforce the Circle of Two Keepstar a second time.

I logged in at around 17:15 EVE time to see that there was already a pretty large presence in the system. The first obvious participant was a Northern Coalition. Erebus, which cloaked up shorty after a CO2 Moros undocked to check out the view. An hour had passed, and about 2000 other pilots had jumped into M-OEE8 as well. During that hour two massive CO2 and test fleets emerged onto the battlefield. An enormous ball of Macharials and Nightmare class battleships formed up on the Keepstar to protect it.

Shortly after that the massive blob of super-carriers surrounding the Erebus launched their fighters and started attacking the Keepstar. The CO2 and Test forces had strategically placed bubbles above the Keepstar, in order to trap the countless waves of enemy fleets warping to the fight. This kept most of them from attacking the structure and a lot of pilots died inside the bubbles.

I had to log off shortly after the Keepstar went out of reinforce mode. By then the number of pilots in system was well over 4400. When I logged in a couple hours later the fight was still going on. The system was still very crowded and active, I even had to wait almost 15 minutes before my character was logged into the M-OEE8 system. The citadel’s Doomsday weapons had ripped through quite a number of capital ships by then, and a wall of wrecks could be seen. In the end, the Keepstar citadel got reinforced for the second time. At around 23:45 EVE time the Erebus, along with all the other capital ships, exited the system, leaving only the salvage crews on the battlefield.