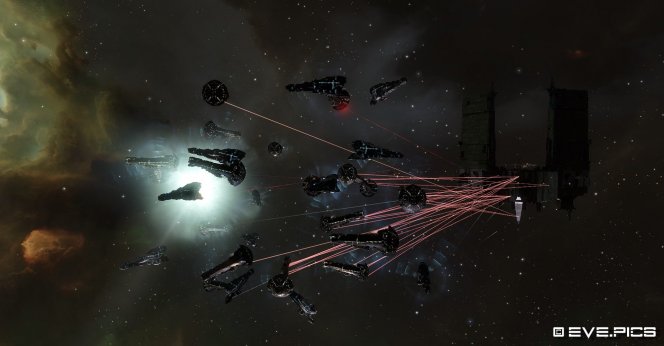 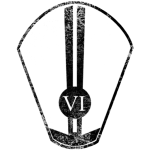 Who doesn’t know the Sixth Empire alliance? If you hear ‘Space Pope’ or Max Singularity (Mr Charles White), then you have found the pilot responsible for New Eden’s most famous Amarrian roleplay alliance.
Sixth Empire is an alliance known for its friendly members and its connections to real-world players. They also support the Broadcast 4 Reps (B4R) movement, which aids real-life players with personal, emotional, and mental issues. They provide a listening ear in times of need and arrange for memorial services for fallen players at the Eve Online ‘Worlds Collide’ monument in Iceland.

I have met several Sixth Empire members, hanged out with them, dined with them, and had an overall amazing time. Besides my own alliance members, I know few other pilots I would like to hang out more with, than members of the Sixth Empire. They are absolutely wonderful people and good friends.

Episode III – The Assault on the Sixth Empire 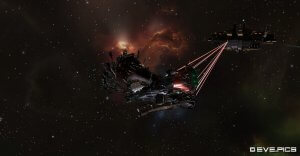 A little while back I received disturbing news on the Sixth Empire Discord server. The Sotiyo in their home system, Basgerin, was under attack by Snuffed Out alliance. Having too much time on their hands, they most likely got bored and decided to kick people that had little possibility of fighting back. With bigger wars going on, most of the big alliances were fighting far out of reach from Basgerin. They weren’t able to respond quickly enough or to send support fleets. This enabled Snuffed Out to get their super-capital fleet for a full-on assault.
I took a hauler filled with combat ships to Basgerin and prepared for the armor timer of the Sotiyo.

The enemy of my enemy is my friend…

As I prepared for the defense of the Sotiyo, I got in touch with members of the Sixth Empire. I wanted to see which fleets I could join and which ships I needed. As we didn’t have enough time, we were not able to form a capital/super-capital fleet big enough to counter Snuffed Out. My carriers and dreadnaughts were 6 cyno-jumps away, and most other pilots shared the same issues. Somehow I ended up piloting my trusty Manticore stealth bomber in a full Shadow Cartel bomber fleet. All the red and orange pilots quickly turned to purple, and enemies became allies for a common cause. A once so peaceful system filled up with around 1400 pilots, as Snuffed Out jumped in gigantuous ball of carriers and titans. 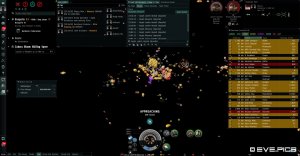 I was on TeamSpeak with the Shadow Cartel fleet, with W0wbagger as FC. There had been little time to coordinate the defense with the other alliances that came to Sixth Empire’s aid. Therefore we sadly couldn’t prioritize targets as a whole, and we had to go with what we saw happening on the battlefield. We struggled to break through the enemy’s defence, but we managed some capital and sub capitals kills. Without proper communication, local chat became the playground of FC’s, and targets were called in there. As a reaction, Snuffed Out pilots began doing the same. As a lot of the allies were in different fleets and had random standing with each other, some started shooting each other. This all added up to the chaos and confusion.

The little Keres that could 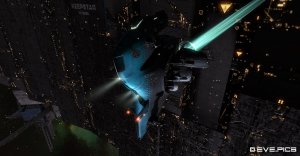 Shadow Cartel’s FC did an amazing job at leading the fleet. Wowbagger stayed determined and level-headed and gave clear instructions. After we destroyed an Apostle I had to quickly grab a new ship. I flew back into the fight in a Keres, the Gallente T2 Electronic Attack Ship. Complementing the Stealth Bomber fleet’s range I was able to sensor dampen the targets. The few guns it had on it also took out some drones. In one of the final few attempts to kill the attackers, W0wbagger warped the fleet in range of a squad or Tornado battlecruisers. The entire squad quickly warped off, aside from one single Tornado. My little Keres had caught it at the long end of my 38 km ranged warp disruptor. In a full-on surprise, the stealth bombers launched a volley of torpedos, with the unmistaken destructive outcome.

A sad outcome for Sixth Empire 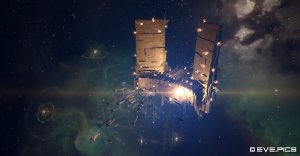 The confusion on the battlefield, the lack of communication between groups, and the lack of capital ships made it impossible for us to counter Snuffed Out and friends. The Sotiyo met an unfortunate demise. To add insult to the injury, Snuffed Out even anchored their own Fortizar on the grid, next to the Keepstar. In the days after, the Keepstar and the Fortizar were destroyed as well. I tried to form with allied groups but there was little that we could do. I just sat there, helpless in my little Interceptor, taking screenshots.

I’ve been playing Eve Online for a long time, and I know that everything in space can be destroyed. No home system or alliance really ever lasts. But in my opinion, you’ve really got to hit rock bottom before you attack a group of players that is responsible for saving human lives. Sixth Empire is home to many individuals, some of who would not have lived to see another day if they were not taken in by the Space Pope and his friends.

Even though their structures got destroyed, their will and resolve lives on. Sixth Empire has found a new (temporary) home and continues to be a home for a lot of capsuleers. I hope to see the day when The Pope Keepstar gets resurrected and I can visit it again.